The Impact of Poor Cross-Cultural Training

Cross-cultural communication is defined as the field of study that looks at how people from differing cultural backgrounds communicate, in similar and diverse ways among themselves, and how they work to communicate across cultures.

A clear example right here at TrainingFolks day in and out is managing the subtle cross cultural differences between our Canadian and American offices.  Keeping in mind the importance of Independence Day in comparison to Canada Day or American Thanksgiving to the Canadian celebration is just a start!  While half of the office may be eager to get through a shortened week and booking meetings earlier on, the other half may not feel that immediacy given they will be working a full five day week.

While this is a very minor difference in culture to consider there are a number of larger differences that affect coworkers and an organisation as a whole.  When companies are able to identify and plan for adequate training around these differences, they will find success is contagious.  Conversely when learning and business leaders fail to see the need to address these variations, the path to success will be a rocky one. 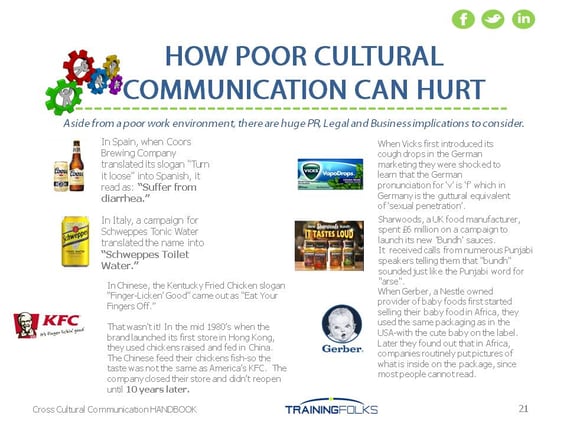 In today’s market place where conducting business globally is more common than not, language and areas contained within this category are critical to business success.

A recent study conducted by Economic Modeling Specialists International revealed recent statistics that show Hispanic and Latino workers increased in 96% of all occupations, 90% for Asians and 22% for African-American employees.

Specific words or terms, tone, written language skills and accents all impact the way communication is received and messages are perceived.

Although exaggerated, Gloria from Modern Family and her accent as understood by a traditionally English speaking household is harder to understand than she may think.  The frustration is felt not only by her but by those that she is attempting to communicate with as well.

Imagine the impacts of a situation like this within your executive or leadership teams.

Is your organisation small, medium or a large enterprise?  Are you local, regional or global in scope?  Is the structure horizontal or vertical?  Would you say leaders have an open door or more of a structured communications and collaboration policy?  All of these things greatly impact the role of a strong cross cultural communications program.  For example if a new employee from India where ‘Sir’ and ‘Madame’ are still used as ways to address executives in some companies joins a smaller firm in New York, how will they react when they are told to call their boss by their first name?  On the flip side, how will the CEO feel being called ‘Sir’?

Technology is perhaps one of the fastest changing and most daunting of areas to address with respect to cross cultural training.  Tasks, learning and communication can all be done across a number of platforms in today’s environment and ensuring that the entire workforce at your organisation is up to speed on how to use them, what the parameters of use are and what violations may look like are all important.  For example, Digital Commons published research findings that indicate ‘that Americans are less accepting of mobile phone use in work environments and are more likely to see it as distracting compared to other cultures’.  In this case they were comparing American to Chinese workplace environments where mobile usage in the workplace is much more common and accepted.  Imagine a workplace situation where a Chinese executive is on her phone messaging while her American colleague is presenting a quarterly review.  The presenter may feel that she is being ignored and that her colleague is being rude.  The participant however, likely has no idea that her behavior is being perceived as such and is actually listening while finishing off another task via chat.

Sometimes it’s what you don’t say that really matters.  Think about situations where a co worker walks into the kitchen with a super short skirt, a shirt that may be buttoned a low, cologne or perfume that lingers for the day even when they leave or the dreaded B.O. 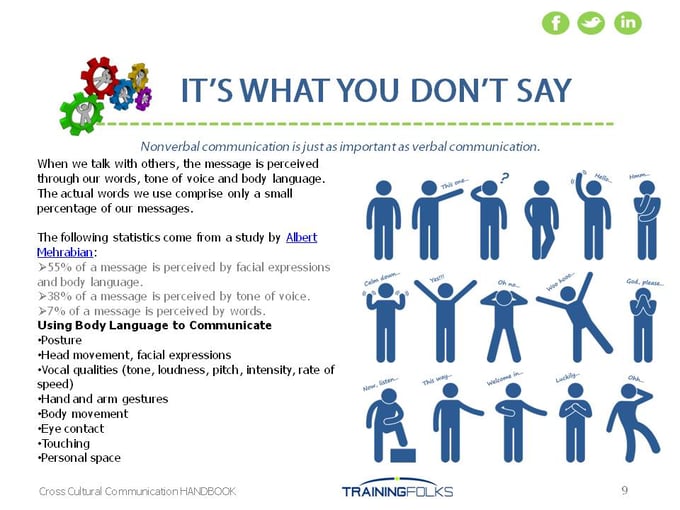 While all of these things may be very normal and accepted in some cultures, other cultures simply may not understand them.  It is important to ensure that these non verbal cues including the most important, body language, are addressed in a strong program across the organisation.  When people start making assumptions based on these differences, the inevitable results will be uncomfortable working situations which lead to lower productivity and eventual turnover costing the company thousands.

Step one to addressing issues in your cross cultural culture is to review and rate it.    Download our FREE Cultural Communications Report Card today and see where there are areas in need of improvement. 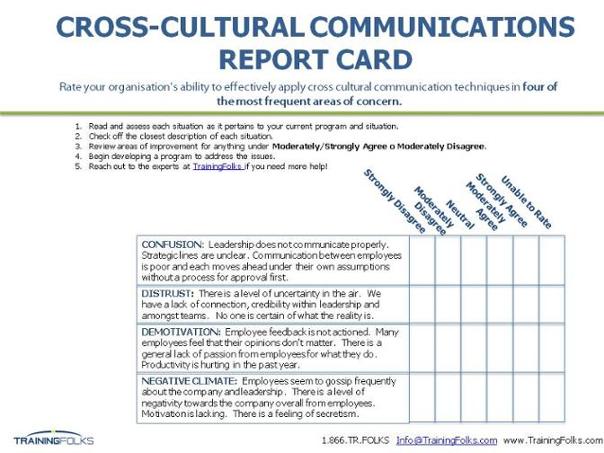 If you’re looking for further assistance with reviewing and developing your cross cultural communications and training program get in touch with one of our experts today.  They’ll have you speaking the same language in no time!